Unlike many other casino games, blackjack is not simply a game of chance, although luck certainly plays its’ part.

For example, if player one hits they will get the next card at the top of the shoe, meaning the next player cannot get that card if they hit. So there is a knock on effect for every single decision made by every single player.

This means that players who put the time and effort in to learn the game backwards can take advantage in certain situations and also learn when it is best to step back and wait for the next good opportunity.

There are a number of levels to blackjack mastery, and we will take you through them all in this article. Very few people will have what it takes to reach the level of the very best blackjack players, but with a little bit of practice you can certainly improve your results, profoundly in some cases.

We will assume you are already familiar with the standard rules of the game, and will be dealing with regular blackjack, not any of the variations. 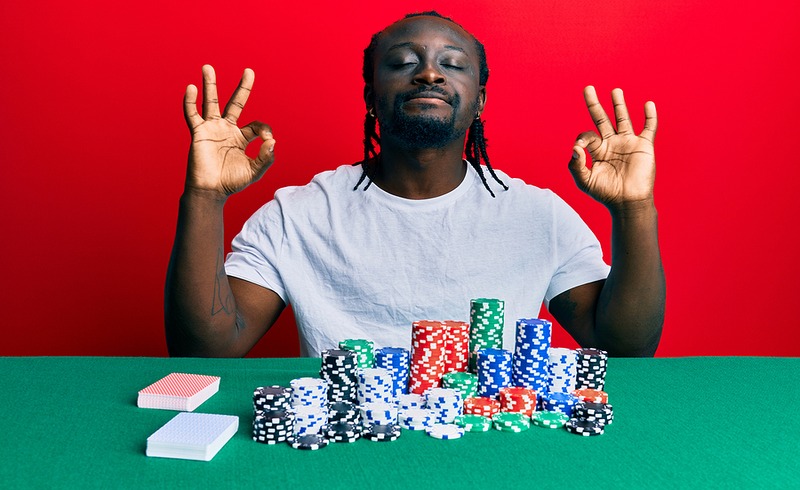 Before diving into the meat of the article, there are a few skills outside of playing the game that will definitely help you improve.

Like everything else, the best way to harness these skills is by practicing, and some of them will tie in to the strategy you are using as well.

As you can see, this is all mental agility really, the ability to see through the fog and make rational, logical decisions even when things haven’t been going your way.

The best way to improve your concentration is to play for increasingly longer periods of time using a demo game so it doesn’t cost you anything. You can also practice money management in this way by breaking up your demo credits into betting units:

You will soon find out if you are betting too much per game as you will run out of money early on. The key is to give yourself enough betting units to withstand a longish losing streak, and still be able to double when the need arises.

In the world of real money, a player with £100 who bets £20 per hand only needs to lose 5 times in a row and they will bust out, but if that same player bet £5 a hand they could lose 5 times and still have 75% of their funds left to fight on with.

Table minimums in high street casinos can be an issue here for players with less cash to spend, but online you can often play for £1 a hand and sometimes even less.

You can’t really test your mettle under pressure online though, you need a real casino environment for that. Yes it can be nerve racking online too, but you are not being watched and can play to your own pace, whereas in a real casino the dealer won’t let you hang around and other players plus spectators will be analysing your play.

Lastly, improving your maths can be done during practice play. You only need to improve your maths skills where it relates to the game though, there’s no need to go off an re-take your GCSE’s, so this should improve instinctively the more you play.

It’s All About House Edge 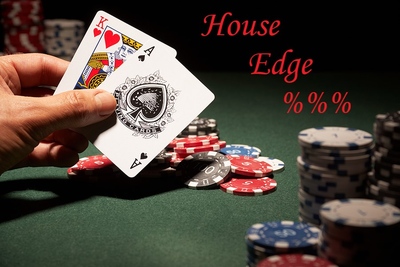 All casino games have a house edge, that is the mathematical advantage the casino has over the player.

The edge for many games, like roulette and slots, is fixed. This means the player can’t do anything to improve their chances of winning, all they can do is manage their money and cross their fingers.

However, as we have already mentioned, blackjack is different because the player has decisions to make on each hand they are dealt.

The house edge on a regular game of blackjack is actually changeable depending on how well you play. Someone playing basic strategy can get the house edge down as low as about 0.5%, which is tiny; but an inexperienced player will give much more than that away by making bad decisions, so it could be as high as 2% or more.

Really skilled players can chip away at the house edge further and in some cases are even able to give themselves an edge over the casino.

Don Johnson did this when he took advantage of casinos that wanted to attract whales (big money gamblers) in 2008, and negotiated game terms that left the house with just a 0.263% edge. However, he also negotiated a rebate on losses of 20% as well as daily ‘show up money’, leaving him with a 0.26% edge over the casino when they were factored in.

A regular non-millionaire player wouldn’t be able to get this sort of deal (he was also a PhD mathematician), but there are still ways to grind down that house edge and push the odds further in your favour. If you can do that and catch a little bit of luck at the same time, you would certainly be ‘good’ at blackjack.

How to Improve at Blackjack 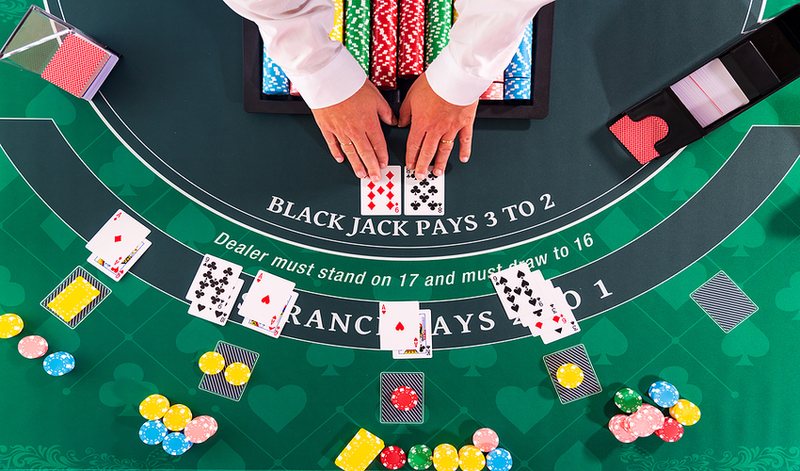 So now you know that it is possible to improve your blackjack playing skills, but how do you actually do it?

The three steps to master are outlined below from the easiest to the hardest.

The first level of improving your blackjack performance past the level of a regular Joe is to learn how to play the basic strategy, also known as optimal play. The tricky thing here is that the optimal strategy changes ever so slightly depending on the variation you are playing and the rules being used.

We will concentrate on a basic blackjack variation for the purposes of this article, so if you play a slightly different game you will need to tweak the rules a little bit.

Playing optimally essentially just means making the decision that is statistically most likely to bring you success on each and every hand. To achieve this, you need to know exactly what to do in every possible scenario; so you would look at your cards, then the dealer’s up card, and instantly know whether to hit, stand, double, split, etc.

Luckily, other people have done the maths homework here and plenty of strategy guides, cards or tables exist online telling you exactly what move to make in each of these situations. 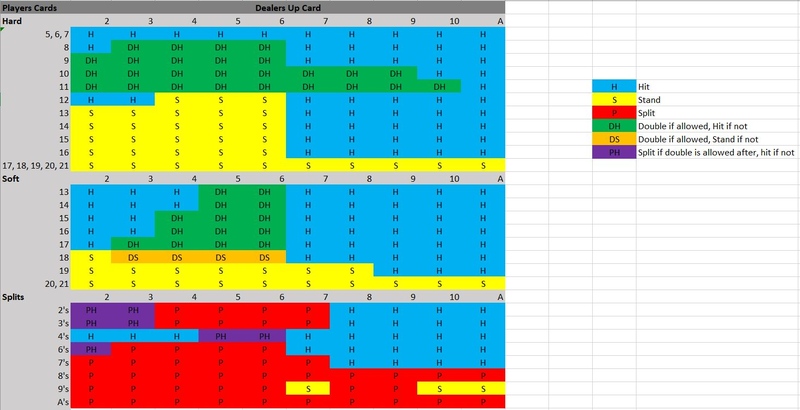 Each situation has been examined and the probabilities of losing or winning the hand based on the dealer’s up card have been calculated. This means that if you follow the guide you will always be making the smart play even though it sometimes might not feel like it, or might be extremely close.

This doesn’t mean the optimal decision will always come off of course; in a situation where probability says that standing will win you the hand 90% of the time, there is still a 10% chance that an unlikely scenario could ruin your day, so it will happen.

However, over the long term you will be better off even if you are unlucky in the short term, and because the house edge is so low in blackjack, longer periods of play are needed to average out the probabilities of each hand.

Anyone can come along with a one off £100 bet, make a statistically bad decision on a single hand, get lucky, and win; but if they played like that over hundreds of hands they would lose a fortune.

Learning a perfect strategy does take time, but once you have it committed to memory you will be able to quickly tinker with it and adapt it to tables with slightly different rules. 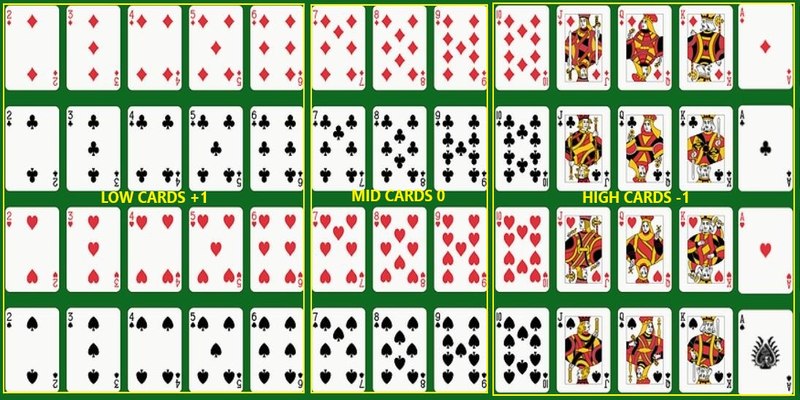 The next step on your journey to blackjack wizardry is to understand and perhaps even use card counting.

This used to be an extremely effective way to make money from the game, but unfortunately casinos got wise to it long ago, and even though it is perfectly legal the casino is well within their right to refuse your custom if they spot you doing it – and it isn’t difficult to spot unless you are very very good.

Even if you are, there are now so many decks in the shoe that you have to play for a long time before the count can be utilised, and shoes are shuffled or swapped more regularly which destroys the count. If you ever find a game using a single deck (which practically nowhere does anymore) then card counting is a gold mine, but sadly this is unlikely.

We have a full article on card counting so we won’t explain it again in full, but of all the different card counting strategies (there are quite a few), the most widely used works as follows.

At this point they can begin betting larger amounts because their chances of winning hands have greatly improved, so the result is larger winning bets more often equalling greater profit.

That is a very basic description, and anyone who has counted cards successfully uses far more complex rules and knows when to break them too, but you can hopefully understand the concept.

Learning how to count cards and then tweak the approach based on the variation and table rules you are playing takes a lot of dedicated practice, and it is generally only mathematicians and scientists that have really mastered it. We have articles on many of them, but Edward O. Thorpe is widely accepted as the originator of card counting (even though he technically wasn’t), and the MIT Blackjack Team are probably the most famous card counters of all time. 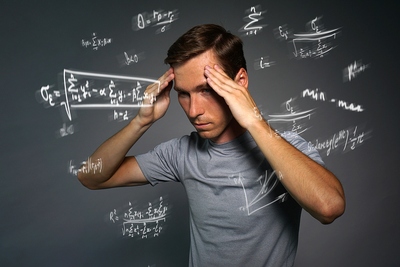 We are now getting into territory that practically no-one would be able to experience, but for big money players in the right economic climate, it is possible to create deals with casinos.

This might be for certain table rules to be implemented or taken away, or for cash bonuses or loss rebates to be written into the rules.

Casinos would agree to this because they make a lot of money from rich gamblers who wager much more than the average player, and since they have the edge on every game anyway, they assume they will always win in the long run.

However, as with our Don Johnson example earlier, a rich player who is also incredibly intelligent can create a set of rules and limits etc that actually tip the balance in their favour rather than the casino’s, without the casino figuring it out.

This basically requires the player to be smarter than the decision maker at the casino in question, and if they can get their tailored game signed off, they can exploit the loopholes they have created to win an awful lot of money.

This really does require next level mathematical ability though, so don’t feel bad if you don’t become quite this good at blackjack.